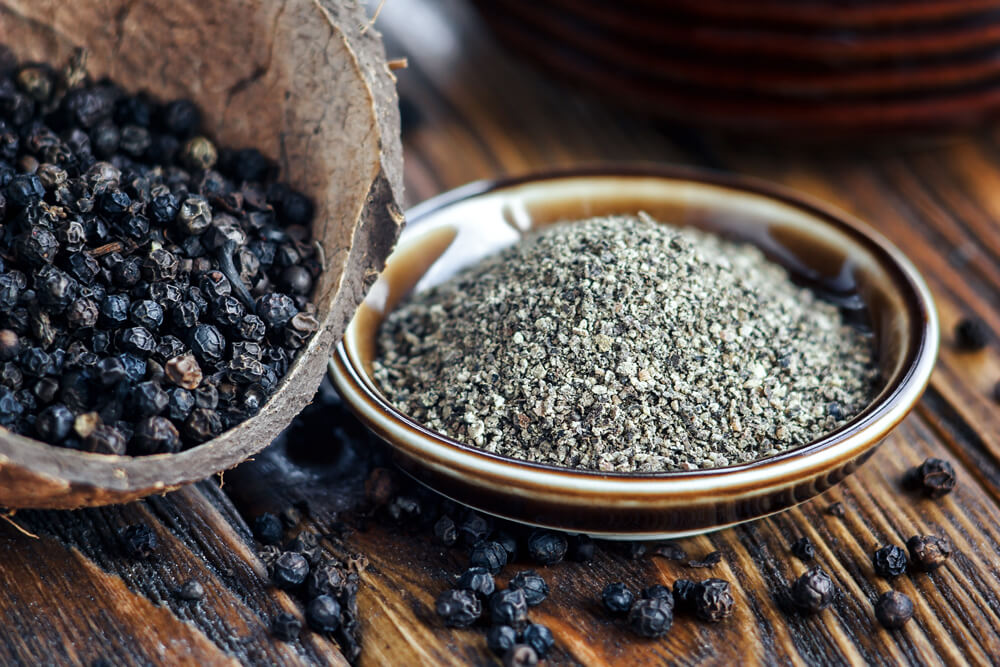 Black pepper generally regarded as the “king of spices” or “black gold” is a very important spice that offers a plethora of wonderful benefits to the body. It is the most commonly and widely used spice in the world and it enhances the taste of any meal it is added to.

Archeological proofs and findings suggest this wonderful spice has been in use since 2000BC, it is believed to have originated from India but it has spread all around the world because of its medicinal and health benefits. It was used in the mummification process of Ramses the great, his nostrils were filled with black pepper.

It was a luxury spice afforded only by the rich in those days. It was the most wanted spice in the tenth century and at a point, it was used as a currency. Indonesia and India are the largest exporters of black pepper.

This tiny berry is rich in essential nutrients like manganese, chromium, fiber, vitamin K, calcium, fiber, and iron. It has a lot of health benefits including soothing toothaches, treating sore throats and coughs, treats depression, indigestion, ulcers, aids the absorption of nutrients, and promote the heart health.

All these and many more put black pepper on the list of the world’s healthiest foods. White, green, and black peppers are gotten from the berries of the same plant, their differences in color are caused by harvesting at different stages when it is ripe.

Its active compound is called piperine, it is responsible for its hotness and spiciness. It available all through the year and it is also a very good preservative of foods because of its strong antibacterial properties.

It is used in smoking caseation therapies and treatments because it can help one quit smoking. Is can reduce the severity of fevers, it boosts the immune system and fights a host of microbial infections and it is dense with antioxidants.

Below are the health benefits of this wonderful spice.

Enhances the Absorption of Nutrients and Bioavailability

This spice helps to make absorption of nutrients like Curcumin, the active ingredient in turmeric and other important and vital nutrients easy and fast. It maximizes the efficacy of foods and herbs eaten and it helps to increase the nutritional status of the body thus fighting undernutrition or nutritional deficiencies.

It also increases the rate at which the body absorbs drugs and it helps them reach their target tissues. The nutritional and health benefits of drugs and herbs are affected if they are not properly absorbed by the body.

Piperine, the active compound in black pepper, carries nutrients, drugs, and other helpful substances in their most active forms to the required body part. It prevents the metabolism or oxidation of drugs when they pass through the liver in the first stage.

Brain problems and loss of control over the brain is a scary health problem and a lot of people are affected by this conditions. Black peppers are one of the few foods on the planet that protects the brain and keeps it strong, and healthy.

Piperine treats cognitive malfunctions, it boosts memory, focus, and concentration and prevents memory impairment. It is used to treat patients with dementia and Alzheimer’s disease, it prevents and treats brain problems caused by free radicals and old age.

SEE ALSO: Top Ten Health Benefits of Turmeric and How to Use it

Treats Arthritis and Relieve its Symptoms

The warming nature of this herb increases the circulation of blood and help to get rid of arthritis pain. It also helps expel uric acid from the body and other toxins which increases the pain and symptoms of arthritis.

Its active compound piperine is a strong anti-arthritic, and anti-inflammatory compound, it also reduces the perception of pain and improves the health of arthritic patients.

This spice is a natural treatment for common cold, sinuses and a stuffy nose. It cures decongestion and helps to loosen phlegm, it also kills microbes behind this infections because it has a powerful antimicrobial property. It is a great remedy for coughs and sore throats.

It is also used in the treatment of asthma and difficulty breathing, it induces sneezing and coughs which clears the airways and expels mucus.

The carminative properties of this spice prevent the formation of gas, it relieves trapped gas in the stomach and help relieve a bloated stomach.

It increases the secretion of hydrochloric acid which helps to properly digest food and prevent indigestion. It promotes the health of the gut and also helps expel toxins from the body.

This is a natural appetite stimulant, it does by olfactory stimulation and it is one of the most common herbs given to people with poor appetite or to those suffering from an eating disorder.

It also adds flavor and a unique aroma to foods, it enhances digestion and prevents digestive problems. It is used in Ayurveda medicine to increase the intake of foods.

Fights Cancer and other Chronic Diseases

The antioxidants present in black pepper prevent all types of cancer, it has an anti-proliferative property which inhibits cell proliferation.

It also treats and prevents chronic diseases like cardiovascular disease, diabetes, and high blood pressure because it contains a rich amount of polyphenols.

How to Use Black Pepper

You can add this spice generously to your meals. You can also add a tablespoon of black pepper to a cup of hot water and let it steep and take it when it is warm. Do this three times daily.

You can try steam inhalation using black pepper, add black pepper to a bowl of hot water and add some eucalyptus essential oil. This is ideal for respiratory problems. You can also sniff a mixture of black pepper and sesame oil to clear sinuses.

Medical and Health Benefits of Asparagus

10 Common Habits that are destroying your Health